Welcome to the site of PeKa Arabians. PeKa Arabians is a small stud of arabian horses, situated in the countryside of the South-eastern part of the province Drenthe. PeKa Arabians has been founded in 2005 and is managed by the owner Petra Mulder.

The goal of PeKa Arabians is to breed an arabian horse with all the characteristics of the Arabian breed, such as large, expressive eyes, a wide forehead with a clear “dish”, long neck, good legs and of course strong movement. I hope to accomplish this by finding the right combination of different bloodlines. To reach this I look strongly for quality and beauty. 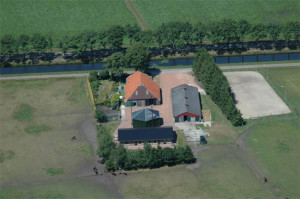 It has been almost 20 years since I got “infected” with the arabian virus. I was working in North Carolina at the stables of “Four birches Arabians” owned by the Dutch family Verwoerdt. The Verwoerdt family was breeding arabian horses and their top stallion was Sirladdinn, son of the legendary stallion Aladdinn. I fell in love instantly with this stallion and was allowed to ride him every day. One of the mares of the Verwoerdt’s was Sazhenka, a daughter of the stallion Prononce, bred by R. Den Hartog of the Kossack Stud.

In 2001 I moved from The Hague to Kibbelveen in the province of Drenthe where I own a group accommodation called “the Kibbelhoeve”. 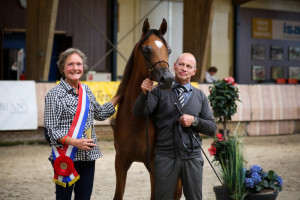 Sazhenka moved with me to Drenthe and after one year also Sirladdinn came to enjoy his pension. Sadly Sirladdinn died in 2004 at the age of 21. In 2005 at the age of 20 Sazhenka had a filly named Sashal by the stallion Shamal Ibn Kendal. Sashal, a beautiful sorrel, will stay at PeKa Arabians for the rest of her life because she was the foal I started PeKa Arabians with.